Anne McCaslin sat in her post-tonal theory class two years ago, and her mind began to drift. She had trouble concentrating in her vocal pedagogy class. Study sessions were often unproductive, and she became frustrated, even mad, with herself.

The college finish line was in view, but things were getting cloudy.

McCaslin excelled in school to that point, but as her academics became more rigorous, she struggled to keep up. She eventually failed the two courses. McCaslin doubled her efforts the next semester, but still felt like something was off. She consulted with professor Sheila Converse and McCaslin agreed to get tested for attention deficit disorder. When she found out she had ADD, it explained a lot, and McCaslin began to arm herself with tools to compensate and complement her learning style.

That’s where The A Game came in handy. Converse had assigned the book, which lays out “Nine Steps to Better Grades,” and McCaslin studied up on concept mapping, a technique discussed in the book that helps many students visualize and organize ideas. 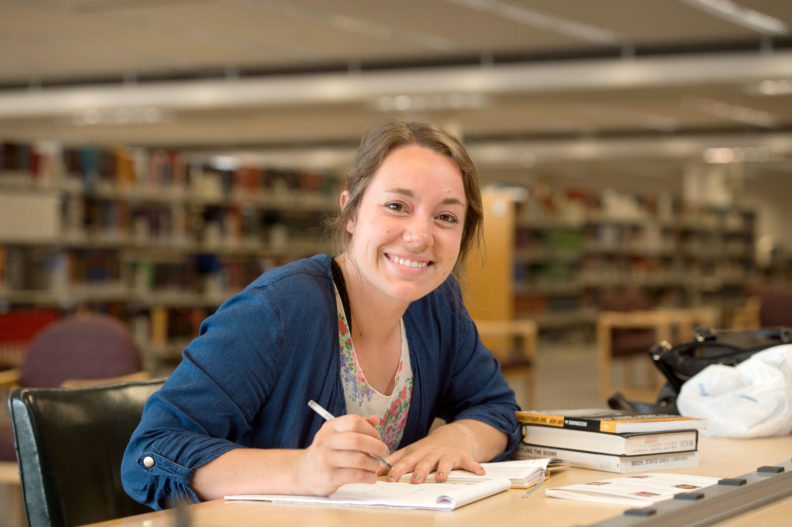 “Concept maps were something that was really effective for me in utilizing the way my brain works because I have ADD,” McCaslin says. “Utilizing that high rate of connectivity to make concepts more integrated into the knowledge I already had was so helpful.”

McCaslin turned her F’s into A’s. She will be student-teaching this fall and graduating in December with degrees in music education and psychology. McCaslin plans to pass on the tips and techniques in The A Game. She’ll have plenty of opportunities as a teacher.

“I didn’t read the book until my junior year – I really wish I had gotten these techniques earlier,” she says. “I got to the point where I was academically deficient one semester. I got tested for ADD, and the next semester I got the highest GPA I had ever gotten. I didn’t really use the resources available to me until I found out I had ADD. I think reading the book and getting some of those techniques were definitely a step in my turning point.”

Converse uses The A Game in her courses and even with experienced students, she finds that it makes a difference when students are able to apply the tips and techniques.

“I’m a huge fan of The A Game,” Converse says. “I gave it to all my students in my vocal pedagogy class because they’re all going to be teachers, and I told them, ‘This is all the stuff that I’m going to say to you, but also what you should say to your (future) students.’ For some students, concept mapping is like magic. And that’s what it was like for Anne.”

McCaslin is excited to teach students of her own. She hopes to teach overseas after graduation, and eventually in low-income areas where she can truly make a difference for young students. She’s overcome obstacles and has a lot of valuable advice to pass on. What would she tell a nervous freshman about starting at WSU?

“Introduce yourself to your professors early on,” McCaslin says. “It’s not weird. You think it’s going to be weird, but it’s not. I’ve taken professors out to coffee, just to get to know them and it’s incredible what that foot in the door will do. Get a tutor. Use the unit overviews for your class and see where you can find information other than the textbook. Especially if you have a hard time reading, which has been my biggest problem, find another way to get the information. Our brains tend to store information better when it’s presented in a variety of ways.”